Summary of the workshop on "Communication strategies between Volcano Observatories and the Volcanic Ash Advisory Centres in Europe".

On 5-7 February 2019, the UK Met Office hosted a EUROVOLC workshop to bring together the Volcano Observatories (VOs), Volcanic Ash Advisory Centres (VAACs) and Volcanological Research Institutes (VRI) in Europe. This activity came under the EUROVOLC Networking Activity “Connecting the volcanological community with VAACs” within Work Package 4, which is centred on networking atmospheric gas and aerosol observations. The workshop brought together ~35 leading scientists and operational staff from six of Europe’s VOs (Iceland, Italy, France, Spain, Portugal, and Greece) and the London and Toulouse VAACs. Seven other supporting institutions and organisations also participated.

The invited participants took part in a mixture of talks, discussions and scenario-based activities to strengthen links and coordinate interactions between the volcano observatories and the VAACs for improved crisis response. This was the first time that a dedicated meeting had been held to bring together all of the European volcano observatories with the two VAACs.

The workshop identified how VOs, VRIs and VAACs currently communicate and share information, limitations within these procedures and positive ways these could be improved. Key recommendations for future improvements in the communication procedures were defined. These include clarifying the guidance on the use of the VONA (Volcano Observatory Notice for Aviation), the need for the VONA to be sent to both the lead and back-up VAAC during events for improved back-up response, and archiving the VONAs on VO’s websites. It was agreed that two-way feedback between VAACs and VOs is essential, and the VAACs should include the notification of the VOs in their back-up procedures, as well as introducing as standard a debrief process between the relevant VAAC and VO after major events. In quiet time, regular sharing of scenario information and summary status reports will improve knowledge at the VAACs. It was recognised that it is important for all VOs to participate in exercises, and for both VOs and VAACs to use exercises as opportunities to test the implementation of these recommendations and revisions to procedures.

The workshop was a resounding success with all attendees saying that it had improved their knowledge of the roles and work of the European VOs, as well as their awareness and understanding of the International Civil Aviation Organization procedures for volcanic ash. Over 95% of participants agreed that it had improved their knowledge of how the European VAACs operate and communicate. A follow up workshop to review progress and continue fostering these connections was recommended as one of the outcomes.
Further details on the workshop are described in report D4.4

On 5-7 February 2019, the UK Met Office is hosting a Eurovolc workshop to bring together the Volcano Observatories and Volcanic Ash Advisory Centres (VAAC) in Europe. This activity falls under the Eurovolc Networking Activity “Connecting the volcanological community with VAACs”. The workshop will bring together ~40 leading scientists and operational staff from all of Europe’s volcano observatories and the London and Toulouse Volcanic Ash Advisory Centres (VAACs).

Invited participants will take part in a mixture of talks, discussions and scenario activities to strengthen links and coordinate interactions between the volcano observatories and the VAACs for improved crisis response. This will be the first time that a dedicated meeting has been held to bring together multiple volcano observatories with the two VAACs. 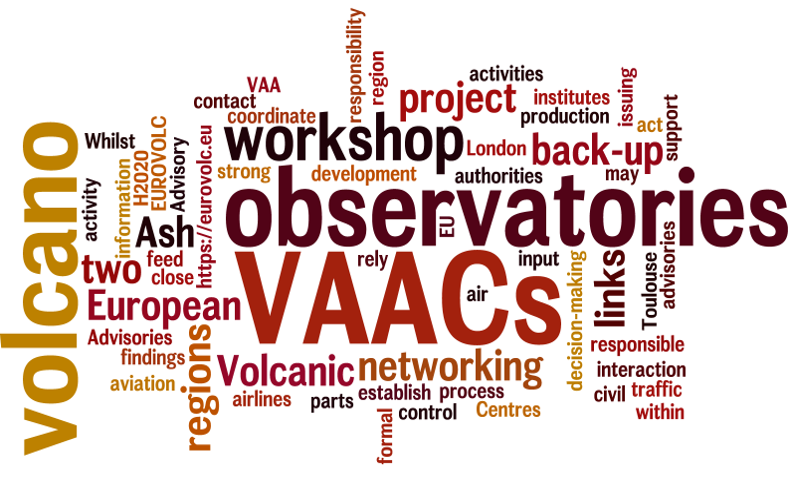 The workshop has been carried out. A report on its outcomes can be read here: Outcome of the VAAC-WS workshop

LIVE from the #volcanic #eruption which started ~1:18 pm at #Fagradalsfjall at #Reykjanes peninsula. #EUROVOLC https://www.youtube.com/watch?v=ihTaTv-24aU

Increased seismicity in Geldingadalur started yesterday & by now over 1900 earthquakes have been detected, largest one M4.9 occurred 09:23 this morning & was widely felt. The activity is similar to the one in February but no tremor is detected. Aviation code is orange. #EUROVOLC

Today marks the final official project day of #EUROVOLC. The 46 months of work, resulted in various new products available & valuable for the #volcanological community along with improvements on tried and tested methods. Read about our final meeting: https://eurovolc.eu/?p=3532

Fab to be back in Reykjavik for the @EUROVOLC final project meeting! It's been a great networking project with lots of new connections and collaborations, research carried out and plans for continued growth of the European volc community 😊

The 2nd European VOs-VAACs workshop takes place online 8-10 Nov. Present are VOs from all over Europe along with the VAACs at Washington, Montréal, Exeter and Toulouse. #EUROVOLC #Volcanic #ash #volcano #observatories #EPOS Images show part of the very focused participants.

Insight into the TNA project CO2-FLUX by @LucaCaricchi & @volcpm: Modeling CO2-flushing at Stromboli reveals non-intuitive space-time evolution of excess fluid composition within the magmatic plumbing system, which may be used to forecast the size of the next paroxysm. #EUROVOLC

In the framework of #EUROVOLC, Researchers of @sciences_UNIGE (C. Bonadonna and V. Freret-Lorgeril), in association with #INVOLCAN, investigated the application of optical disdrometers (pictures) to determine the tephra Grain-Size Distribution and Sedimentation Rate in real time.

Researchers from @VolcanoLMV @OSU_OPGC, in association with @ULPGC, are studying the #CumbreVieja #eruption: sampling of #lava, #tephra and #gas for further analyses, modeling lava flows, and measuring ash fallouts with disdrometers (installed in the framework of #EUROVOLC).

The #eruption in #Geldingadalir had a 7 day break from making a scene, returning to the surface on the 9 Sept. Today we have a nice show of fast advancing #lava. Images: Björn Oddsson-WP7 participant, NCIP and Ásta R. Hjartardóttir, UI. #EUROVOLC

Check out the new #model of #Fagradalsfjall #volcanic #eruption by natturufraedistofnun (http://ni.is) in #3D, #VR or #AR https://skfb.ly/opTSn

Level of uncertainty declared for #Askja due to an #uplift at Öskjuvatn, now measuring 7cm since 1 August. The #aviation color code has been set to yellow. IMO & UI will potentiate the monitoring network around Askja for a better coverage & surveillance of the #volcano #EUROVOLC

#Askja had been deflating since '83. #GPS observations & data from #Sentinel-1 show that Askja began inflating in August '21, with the uplift signal centered on the w-edge of Öskjuvatn Lake, corresponding to ~5cm/month of vertical motion. Info: https://en.vedur.is/about-imo/news/uplift-signal-detected-in-askja-volcano #EUROVOLC

The #flood in Skaftá has likely reached its peak and is decreasing slowly. On the 30th Aug, increased electrical conductivity was observed in Skaftá by Sveinstindur #hydrological station and #sulfuric smell was in the nearby areas.

Fantastic to see the launch of the #EUROVOLC citizen science web platform for observations of volcanic events. This has been a superb team effort by many in the @EUROVOLC project, with the development led by @BritGeoSurvey https://eurovolc.bgs.ac.uk/